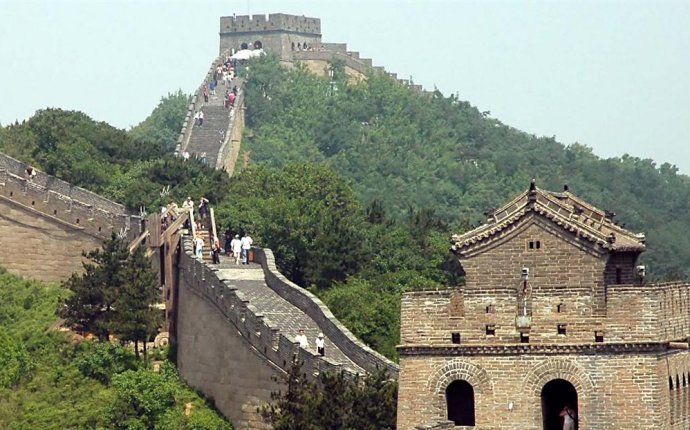 It is actually a complicated question. There are several Great Walls that were built by different dynasties such as the Qin Great Wall and the better known Ming Great Wall. But there are estimates about the number of laborers and records for how many years it took to complete the work...

Construction Time of the the Ming Wall

The Great Wall at Badaling

Over 2, 000 years, many imperial dynasties and kingdoms built, rebuilt, and extended walls many times that subsequently eroded. The latest imperial construction was performed by the Ming Dynasty (1368–1644), and the length was then over 6, 000 kilometers (3, 700 miles). This is the wall often referred to when we talk about the Great Wall.

The Ming dynasty spent 200 years to build their wall. Decades of work that went into constructing wide and paved turreted walls with towers. These walls served as troop highways in the rough terrain. The Badaling Section of the Great Wall shows the Ming laborers' rigorous craftsmanship.

Construction Time of the the Qin Wall

The first complete Great Wall was linked together around 221 BC, and it is believed to have been built over a period of about 20 years. The Qin connected together and expanded walls already in place that were built by prior kingdoms.

There are historical records that suggested 300, 000–500, 000 soldiers were assigned to both build and guard the Qin Great Wall with the help of 400, 000–500, 000 conscripted laborers. Other records suggest that up to 1.5 million men were used during the peak of Qin construction.

Construction Time For All of the Walls

If all the fortified walls that were built by the different dynasties and kingdoms around northern China are included, the total length would exceed 0, 000 kilometers (12, 000 miles). All these walls together were completed over a period of 22 centuries. It is probably impossible to calculate how many millions of people built the Great Wall or the man hours expended.

If your goal is to reach the Great Wall and appreciate its construction, we at China Highlights are here to help you get over all the difficulties. See our Great Wall tours

China Highlights offers tours to all the famous sections of the Great Wall from Shanhai Pass on China's east coast to Jiayu Pass in the west.

The first parts of the Great Wall were built in the 7th Century BC when the region was still divided into many small states.